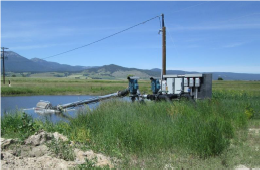 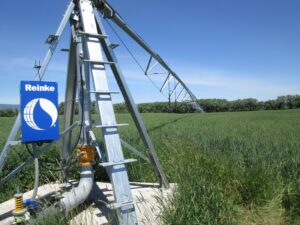 Crop Circle Irrigation Project – Large OWEB Grant #219-5001
Flood irrigation has been used in the Baker Valley for centuries as an effective method of distributing water. However, when applied to annual crops, the soil erosion rates can double, increasing sediment and organic matter inputs through tail water runoff returning to the streams. Sediment entering our fresh water rivers and streams increases the embeddedness of the channel, increases the pH level of the water and supports algae growth due to the high level of readily available nutrients, thus damaging habitat and impairing the survival of native aquatic species. Because so much flood irrigation runoff returns to surface receiving waters, the link between soil erosion and surface water contamination must be addressed.

This large-scale irrigation project improved 517 acres of previously flood irrigated ground through the installation of five center pivots (purchased and installed by the landowners as
project match); 9,440 feet of mainline; 5,728 feet of cable in conduit to provide three-phase power to the pivots; and one pumping station, installed in an existing irrigation pond at the project site, equipped with a debris screen. In addition to the center pivots’ capability to measure and provide the exact amount of water that can be held by the soil and used to support the crop being irrigated, thus eliminating irrigation runoff from entering the watershed, there is also a flow meter installed in the mainline to provide accurate water
measurements to each of the five pivots. Any unused irrigation water will now remain in the North Powder River for aquatic habitat and fish passage.